One of the things I love most about being an author is discovering new books and meeting fellow creatives. I get to sit with a pile of new (or new to me) children's books and call the time spent "working." It's the best kind of work!

Valerie Bolling's debut picture book, LET'S DANCE!, (illustrated by Maine Diaz, Boyds Mills & Kane, 2020) is so much fun. The language is playful and rhythmic, the characters are diverse, and the invitation to join in and dance is irresistible!

I was introduced to Valerie by a mutual friend, Susan Uhlig, after I put out a call for contributors for my Birth Stories for Books and Have Swag Will Travel blog features. Valerie was kind enough to share her path to publication for LET'S DANCE! with me, and I'm so delighted to be able to share it with you here, today.

Take it away, Valerie!

At the start of each year, my husband and I set goals for ourselves. Having been inspired by a visit from our nieces in December of 2016, I decided that one of my goals for 2017 would be to explore the possibility of getting a picture book published. With this in mind, that January I had written two stories in which each of my nieces was the protagonist (The Greatest Gift for Zorah and I Do for Anyah). I also found and revised two stories I wrote many years ago (Play Date and Come In! Come In!).

Thus, began my pursuit to become a published writer. I spoke to people who I believed could be helpful – and they were – and I wrote and wrote and wrote ... and revised even more. I enrolled in a course at Westport Writers Workshop and revised I Do and The Greatest Gift. I continued writing after the course ended.

In June of 2017 I wrote my first draft of Let’s Dance! Since most children enjoy dancing, like Zorah and Anyah (and adults do, too, including me!), I decided to write a fun, rhyming story celebrating the universality of dance. My goal was to showcase dance as a language we all speak, even though we have different “accents.”

Let’s Dance! was originally titled I Love to Dance, as this line was repeated throughout the book. Marianne McShane, a friend who is an author, storyteller, and librarian, suggested I read Watersong by Tim McCanna as a mentor text and that I start my story with a line that appeared later in my manuscript: “Tappity-tap/Fingers snap.” She said that would immediately encourage readers to dance along from the beginning of the book. Her recommendations helped significantly in revising the book and inspired me to change its title. Since the “I love to dance” lines were deleted from the manuscript, I decided upon Let’s Dance!

Revision is an ongoing part of the writing process and perhaps the most necessary. That’s why I share the story about Marianne. No writer achieves success on her/his own. We each have friends, writing partners, critique group members, and a large supportive writing community that encourages us to forge ahead amidst all of the rejection. I am fortunate to have an amazing critique circle: critique partner, critique group, debut group that offers critique, WNDB mentor, and, most recently, an agent! At the time I wrote Let’s Dance!, however, Marianne was the only person who offered feedback because I hadn’t formed my circle.

I continued to revise Let’s Dance! until the end of 2017 and felt ready to start querying on January 1, 2018. What a way to start the year, huh?! I sent more queries on February 25, 2018, and an agent was interested in the story! She requested I send her two more manuscripts, but when I did, she wasn’t as interested in those stories, saying, “I foresee a harder sell for the other projects.” Thus, she decided to pass.

All in all, I submitted Let’s Dance! to 26 agents, editors, or small presses. Of the 26, I received eight “not interested” responses, and 16 people didn’t bother to respond, which is not uncommon. If there’s no interest in a manuscript, there may not be a response. I received two yeses: the first from the agent I recently referred to, and the second from the editor who wanted to publish the book. (That story is coming soon!)

In addition to direct queries, I participated in two Twitter pitches in June. I received a “like” in #PitMad that was turned down when I sent the manuscript, and I received another “like” later in the month during #PBPitch. That was the “like” from Jes Negrón, an editor at Boyds Mills & Kane, that led to Let’s Dance! being published!

When I sent the manuscript to Jes on June 18, 2018, she emailed me two weeks later on July 2, requesting to have a conversation. During that phone call, I learned that she was interested in acquiring the story! I shared with her my desire for the book’s illustrations to display an inclusive representation of children: gender, race, ability. I specifically said, “I want a lot of brown kids in this book!” Jes assured me there would be. I also said I wanted children of differing abilities and from diverse backgrounds. I said I wanted the ballet spread to include a boy in a tutu, and Jes agreed. (In the end, I got something even better: a child in a blue tutu whose gender is indiscernible.)

Jes asked me to write illustrator notes next to each stanza in the manuscript to signify the type of dance my words described. I hadn’t connected all of my words to particular dances, so this was an interesting exercise. When I completed that task in July, Jes said what I had written was fine but suggested deleting two stanzas; one dance was too similar to another, and she didn’t necessarily connect a specific dance with the other stanza. Besides those deletions, Jes changed not ONE word of my manuscript.

In October 2018, Jes expanded upon my desired vision for diversity by sharing that she thought we were missing out on an opportunity to make the story more global. She recognized that some of my words could describe cultural dances. For instance, where I saw “Tappity-tap/Fingers snap” as tap dance, Jes imagined flamenco from Spain. I envisioned the electric slide for “Glide and slide/Side to side,” but Jes suggested long sleeve dancing from China. I am thrilled to have this added layer of cultural representation in my book! It was at that time that Jes requested that I write backmatter: two-sentence descriptions for each dance featured in the book.

It’s ironic that my first published book is written in rhyme because I started out writing “poetry.” In first grade, I had a black and white marble composition book that I used to capture my poetic musings. I loved creating simple rhymes, using the most recent phonics lesson I had learned in school. I created “masterpieces” like: “There is a cat. It sat on a mat. It caught a rat.” How interesting that my writing has come full circle, that my first published book features rhyme. I continue to be grateful that this book, illustrator, editor, and publisher are what propelled me on my path to becoming a published author.

I want anyone who reads Let’s Dance! to know that not only are people connected through dance, but we’re also connected simply because we’re human. Regardless of how we dance or how we look, we are worthy, valuable members of society. I will continue to write books that make all children feel seen and heard and valued and validated. I want to do my part to promote a world of equity and inclusion, of peace and joy.

Thank you for sharing your beautiful and inspiring birth story for LET'S DANCE!, Valerie. Your book is sure to bring so much joy into the lives of children and families that read it together, and dance together.

Friends, the best way you can say thank you to Valerie for spending some time with us today, is to support her work. LET'S DANCE! is available everywhere books are sold. 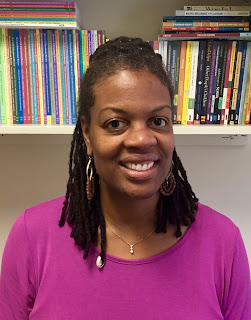 Let’s Dance! (Boyds Mills & Kane) is Valerie Bolling’s debut picture book. In addition to being an author, Valerie has been an educator for over 25 years. When she taught elementary students, it was difficult to find diverse literature for them. Thus, she is passionate about creating stories in which all children can see themselves and feel valued and heard.

A graduate of Tufts University and Columbia University, Teachers College, Valerie currently works as an Instructional Coach with middle and high school teachers.

Besides writing picture books, Valerie writes a Monthly Memo for teachers that she publishes on Twitter, and she has been published in The National Writing Project’s Quarterly (“The Family Writing Project Builds a Learning Community in Connecticut”) and NESCBWI News (“Microaggressions Don’t Feel ‘Micro’”). Recently, she had a poem accepted for publication by Cricket Media.

Valerie is represented by James McGowan of BookEnds Literary Agency, and she is a member of NCTE, SCBWI, the NESCBWI Equity and Inclusion Committee, the Authors Guild, the WNDB Mentorship Program, #12X12PB, 2020 Diverse Debuts, 20/20 Vision Picture Books, and a picture book critique group.

Valerie and her husband live in Connecticut and enjoy traveling, hiking, reading, going to the theater, and dancing. You can visit her website at http://valeriebolling.com/index.html.

**********
Birth Stories for Books is an occasional feature of Dawn Babb Prochovnic's blog. Dawn is the author of multiple picture books including Where Does a Cowgirl Go Potty?, Where Does a Pirate Go Potty?, Lucy's Blooms (Spring '21), and 16 books in the Story Time With Signs & Rhymes series. Dawn is a contributing author to the award-winning book, Oregon Reads Aloud, and a frequent presenter at schools, libraries, and educational conferences. Contact Dawn using the form at the left, or learn more at www.dawnprochovnic.com.
Dawn Babb Prochovnic at 8:30 AM 1 comment:
Share
‹
›
Home
View web version