The Song Writing Part of the Writing Life 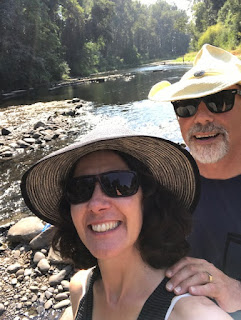 This past weekend my husband, Sam, and I celebrated 30 years of marriage. Although we don't typically exchange gifts for special occasions (other than small, favorite things, such as molasses cookies, or timely items such as tickets to a live concert or play), I wanted to do something especially memorable for this anniversary.

Since we both enjoy live music, and going to concerts together is our most typical date night activity, I thought it might be fun to commission a song from one of our favorite singer/song writers or bands.

I had read about some musical artists providing this type of commissioned service, and I reached out to one of the singer/songwriters we have followed since early in our marriage. She was keen on the idea of participating in the project and asked me for my thoughts on how we might go about it. I told her it was my understanding that most typically the artist would interview the subject(s) to get some background about our life and relationship, and then would write a song with those details in mind. I mentioned to the artist that I was a children's book writer, and that I wished I had a musical background, because I'd love to write my own song. She encouraged me to write my own lyrics . . . and I took the challenge.

I sat down to write, and the words poured out quickly.

One of the constants of the relationship Sam and I have shared for 33 years (30 of those years in marriage) is travel. We are at our very best together when we are planning a trip, taking a trip, or reminiscing about a trip. Since the early days of our shared life, we have held a savings account dedicated to travel. When we accumulate enough funds in our travel account to pay for major expenses like airline tickets and lodging, and enough vacation time to make a flight worthwhile, we start planning a new trip. We've been to some very amazing places in our shared life, and writing about our travels provided focus and structure for my song.

Here are the lyrics for, Travel in This Life With Me:


Our story starts when I was eighteen.
You worked for my dad. We kept the place clean.
Then I moved on to the retail scene.

Holding hands and getting caught.
In ’88 we tied the knot.
We’ve had it good. We’ve loved a lot.

Said I do, and dropped the mic.
Near that place we used to hike.
You’re the one I love and like.

New beginnings. Life as one.
Honeymoon in sand and sun.
Port to port. Just havin' fun.

Weekend trips to camp and ski.
Costa Rica, ninety three.
We were young, and we were free.

Oh Manado, how we cried.
Scuba diving. Almost died.
Would the ocean steal your bride?

Parenthood in ninety nine.
Love those kids of yours and mine.
We’ll survive it sippin’ wine.

Dinner table, six o’clock.
Share our day then take a walk.
You will listen, I will talk.

Pack the van and load some tunes.
Sweet Sunriver, be there soon.
Breathe the pines and chase the moon.

Reminiscing: Minibus.
Fly to Greece, the four of us.
Memories make it worth the fuss.

Little league and basketball.
Parent-teacher conference call.
Off to college in the fall.

Travel in this life with me

Travelin' this life with me.

The artist I had originally reached out to was very kind and encouraging, but she ended up not being able to follow through on the project, so I was back to the drawing board for who I could work with to give voice to my song. We have several musically inclined friends (several of which are in local bands), and I contemplated hiring one of them to work with me. But, before I reached out to any of them, the most obvious and awesome band came to mind: The June Bugs.

A couple of summers ago, during one of our family trips to our Sunriver house, there was a Portland band scheduled to do a concert on the lawn at the SHARC. Sam was very keen on seeing the band--truth be told, I was kind of lukewarm about it because it was a very chilly afternoon/evening and I was more keen on staying home. But I didn't . . . and I am so glad I didn't. It WAS very cool that night, but The June Bugs put on an excellent show. We absolutely loved their concert. So much so, that after we returned home to Portland, Sam and I sought out several of their local concerts. We saw them at an outdoor concert in Lake Oswego, and at a venue they play at fairly regularly in Vancouver, and several other local places around town. We've purchased their CDs and added their songs to our iPod, and we listen to them regularly. Even if we can't make their concerts, we have their concerts written in our calendar "just in case." Our kids love to tease us about being Junebugs groupies. They would be the perfect band to bring our song to life. Happily, Moses Barrett, their lead singer was game.

I reached out to the band via Facebook, and Moses was quick to respond. I shared my lyrics and our anniversary date with him, we came to an agreement on pricing, and I offered many caveats about not having any experience with song writing (i.e. I don't know the structural elements needed for a song such as a bridge or a chorus), and that I was fine with them taking creative license as needed to turn my lyrics into a song. Some weeks went by and eventually Moses got back to me to let me know that the schedule would not work for the full band to put the song to music/record it, but he could do something solo. I was still elated with that plan. Some more weeks went by, and one Saturday afternoon, Moses reached out to me and mentioned that my lyrics didn't include a chorus. He pointed out that Bob Dylan didn't really write choruses either and said he thought the song "lends itself to that Dylan long form song poem aesthetic," and wondered what I thought. I loved the idea, but again, said that I knew Sam and I would love anything he came up with, and that whatever he hears when he sits with the words would be just right.

Some more weeks passed, and then on August 7, 2018 at 2:53 PM, a most wonderful email popped into my inbox. Moses wrote, "Hey, so here is the tune. What do you think? ... I have some time in the studio tomorrow..." Attached was an acoustic version of my words put to music. I sat at my computer and cried happy tears. I was overwhelmed with emotion. Not only was it amazing to hear my words become music, it was incredible to hear my life with Sam conveyed in a song.

I hit "play" about a dozen times, then took my phone down to the basement where my teenaged son was chilling out, and I played the song for him. He thought it was pretty cool too. I played it for my daughter when she returned home from work, and she was visibly touched by it, too. She asked me how long it took to write the words. I answered honestly that it took me a day . . . a day and a lifetime.

About a week before our anniversary, more happiness arrived in my inbox. Moses re-recorded the song more formally in the studio. I love both versions, the acoustic and the studio. With Moses's permission, I can share the studio version with you here.

Next came the hard part of waiting to share the song(s) with Sam.

My kids helped me plan the rollout. Our daughter and her boyfriend, visiting from out of town, made us breakfast on our anniversary. Earlier in the morning I had loaded both versions of the song onto Sam's iPod, then as we ate breakfast, I casually mentioned that the Junebugs had a new song out that I wanted to play. Our daughter hit the play button, and Sam proceeded to eat breakfast and simply enjoy the song as background music. This is exactly what I thought would happen, because he does not typically drill down to the words of a song as closely as I do, or as quickly as I do. He just ate his breakfast and enjoyed the song in a general sort of way. We played it a couple more times, one of those times the acoustic version where the words are more prominent, and told him to listen to it more closely. He jokingly said, "Ha, did they write us an anniversary song?" And then he started really listening . . .  and then came the emotions.

Thank you, Moses Barrett, for making a special anniversary even more special. Sam loves the song as much or maybe even more than I do . . . I and love it quite a lot.

For those of you reading/listening who love this song as much as we do (or like the story behind the song, or simply like to support artists and their art), be aware that Moses and his band are looking to grow their outreach and their following. They have set up a Patreon page to develop a steadier income flow so they can make their art. You can hear their great sound on this Facebook Live concert they offered up to their fanbase a couple of weeks ago--give them a listen and share their work with others! You can also do like Sam and I have done and buy their CDs and/or catch them live in concert. Here is their schedule (they will be at the Oregon State Fair for SEVERAL SHOWS starting Friday, August 24, 2018). It would be great if you could show them some love!

I've long said that someday I'm going to be part of a girl band (I play a mean tambourine!), and recently I've been thinking it would be a good creative outlet to learn more about writing songs. Maybe it all begins with writing the lyrics to my first love song.